Stearman works its way across the country

Summer is gearing up and it is sponsorship season for those of you fortunate enough to have a two seat Vintage Wings aircraft pass through your neck of the woods. There are a large variety of types that can be sponsored and these days the busiest airplane is our Stearman. There is something known as the Stearman smile that virtually all sponsors wear for quite a while after a flight in this aircraft. We never seem to run short of them.

This aircraft is not any old Stearman but one of the few left that actually flew in the BCATP. While over 10,000 Stearmans were manufactured(including spares), only 300 were delivered to Canada. They had the army designation of  PT-27 and the Boeing model type as a D75N1.

In fact, the BCATP Stearman story was one of great frustration for the RCAF. Like the Cornell, Tiger Moth and Harvard, significant modifications were requested, many of them in order to cope with the bitter Canadian winters. These modifications included a canopy, heater, blind flying hood, night flying equipment, a landing light, and an engine baffle to keep the cylinder temperatures up on the uncowled engine. But despite repeated prompting from the RCAF’s representative in Wichita, only the very last Stearman was delivered with the extra equipment. As well, none of the night flying equipment was installed which meant that the three Stearman equipped RAF flying schools had to retain a number of properly equipped Tiger Moths.

By the fall of 1942, Stearman flying had come to a halt due to the cold weather. With no short term solution in sight, the 287 surviving Stearmans were flown back to the US in the dead of winter. They were exchanged for Cornells with the USAAF. This closed the short chapter of Stearman history in the BCATP.

While the type did not last very long Canada, it still did train many pilots in Alberta(along with a few based at a flying instructor school in Arnprior). It seems only fitting that the Vintage Wings PT-27 is returning to Alberta in order to make a new home for at least the medium term. It will be taken on strength by Vintage Wings West at the Springbank Airport in the City of Calgary. The very same city where it was taken on strength just over 70 years ago on May 27th 1942.

But first it has to get there, and while this could be done over several long sunny days, it just wouldn’t be right to pass by all those cities and towns enroute without offering up the chance for the public to get a first hand look. So it will be making frequent stops with smiles available to anyone willing to sponsor a flight.

Meanwhile you can follow it's progress on the Yellow Wings Blog at http://www.yellowwings.ca/?page_id=13

Here is a list of location we will be visiting: 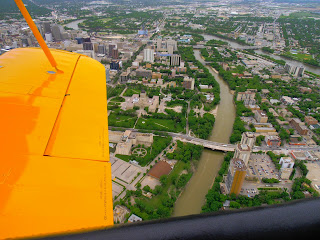 Last week I visited Winnipeg to help Dave Maric and Ron DuJohn fly lucky sponsors over Winnipeg and Brandon. The weather made things difficult but we were able to do 11 rides on Saturday. Here is a nice look at the Manitoba legislature for one of our smiling sponsors and pilot. 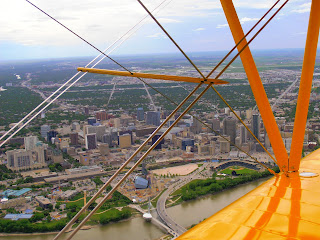 A close-up of downtown with the airport in the background just above the javelin. 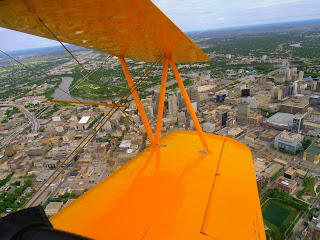 Portage and Main lie just off the lower wingtip while the Red River lies just off the upper wingtip. All of my passengers were able to either fly over their home or their work. 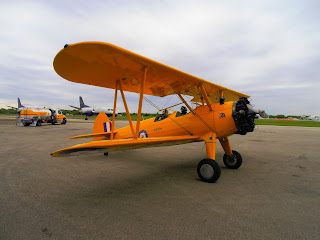 Vintage Wings pilot Ron DuJohn gets ready to take another sponsor overhead Winnipeg from the International Airport. Earlier in the week, the nearby Starbuck Airport was visited as well. Special thanks to Calm Air for helping support our operation. 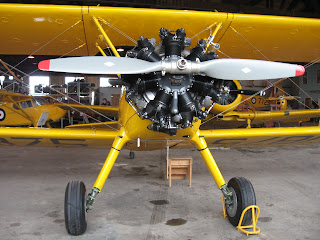 Back among BCATP friends at the Commonwealth Air Training Plan Museum in Brandon, Manitoba. In the background is a Crane, Harvard, Cornell, and Stinson L-5. This fascinating museum focuses exclusively on the BCATP in Canada and is a worthwhile visit for any aviation enthusiast or those curious to learn about the greatest industrial project in Canadian history. The museum was kind enough to let us stay for two nights.
Posted by Unknown at 12:03 AM