There's a New Kid in Town

A different kind animal has been seen hanging out at the Vintage Wings hangar recently. It made a couple of squeaks when it arrived at the airport but that was just the sound of its tires when it touched down gently. It is a De Havilland DHC-1 Chipmunk that has joined the fleet.

With our WWII yellow Stearman training aircraft headed out to Calgary recently to its new western home base, it has quickly been replaced by this post WWII yellow trainer. And while many are sad to say goodbye to the Stearman, it is difficult not to feel joy about this new arrival.

While de Havilland Canada was established as far back as 1928, it had always built aircraft designed by its English parent company. That would change in 1945 when the RCAF decided that the 1920’s era Tiger Moth needed replacement. Design of the new aircraft fell onto Wsiewołod Jakimiuk, a Polish émigré who had designed aircraft for his native country’s PZL company prior to the war.

While the Chipmunk has a few system similarities to the Tiger Moth such as the Gipsy Major engine, free castoring tail wheel and handbrake lever on the pilot’s left side, it’s construction is much different being a low wing monoplane of mostly aluminum construction. Interestingly though, the rear half of the wings are fabric, along with the flight controls.

While it retains some of the ground handling difficulties of its predecessor, it could not be much more different in the air. Gone are the idiosyncrasies of the DH.82C with it’s coordination challenges and relatively slow control response. Instead, the pilot is rewarded with a beautiful control harmony and response that truly encapsulates the feeling of laughter-silvered wings. With it’s incredibly light control forces it is almost as if you don’t need to manouver into aerobatic attitude, you just have to imagine it and somehow, you are magically there.

217 Chipmunks were built in Toronto between 1946 and 1956. However, a further 1,000 were built  by de Havilland in England. The most obvious difference being the different style canopies. Finally, 66 were built in Portugal.

With all four of the Vintage Wings WWII trainer aircraft out of town for two months on their east coast Yellow Wings tour to former BCATP sites, one might think that they are out of luck if they want to sponsor one of the lesser expensive vintage trainers to fly. Nothing could be further from the truth. You can rest assured that the Chipmunk stands ready and waiting in our hangar eager to fly on short notice and it will quickly prove that it is one of the most pleasurable aircraft to fly. 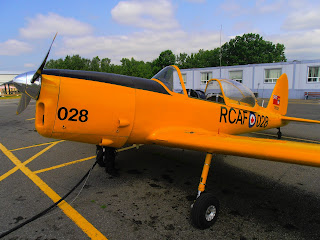 The Vintage Wings Chipmunk sits on the ramp at the Rockliffe Airport. The easiest way to tell the difference from a British Chipmunk is the beautiful bubble canopy on the Canadian version(except for early models). The tail wheel is free castoring making ground operations more difficult at times. 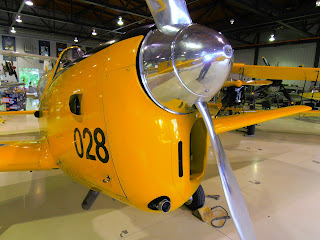 The Vintage Wings DHC-1 Chipmunk parked in front of the aircraft type that it replaced in the RCAF, the DH.82C Tiger Moth. The engine cowls and latches are of a similar style as the Tiger Moth. The intake pipe at the front is for the heater. 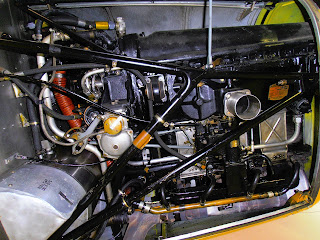 A familiar sight to any Tiger Moth pilot is this view of the Gipsy Major engine although this engine is the Mk.10. Differences include a mount for a starter motor and generator along with engine driven fuel pumps, manual carb heat, cockpit primer and an idle cutoff feature. 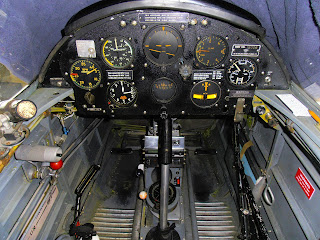 The front cockpit of the comfortable Chipmunk. As you can see, there are no toe brakes on the pedals, instead, like the Tiger Moth, a handle on the left side is for brake use with increasing rudder pedal deflection giving increasing differential braking. The flap handle is on the right. 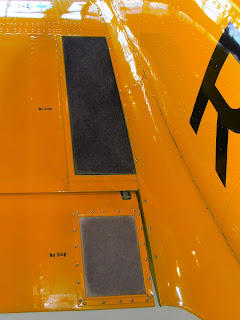 A strengthened inboard portion of the flap allows it to be walked on. The low flap extension speed makes it very easy to overspeed them if one is not careful. The Chipmunk is unusual in the fact that the wings are a combination of riveted aluminum skin for the front 25% chord while the aft portion of the wing is fabric covered as can be seen here if you look closely. The flight controls and flaps are also fabric covered. 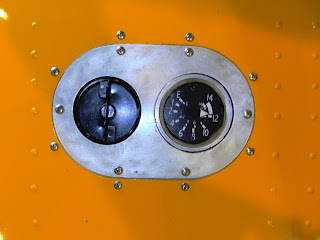 Somebody was smart at de Havilland Canada. They realized that fuel guages in level flight read differently than when in the 3-point attitude on the ground. Therefore they made a dual reading guage with big numbers for level flight and little numbers for ground ops. 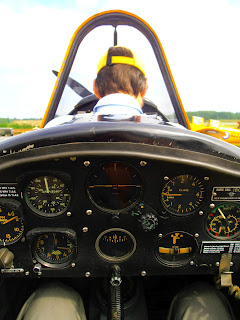 You can see the rear instrument panel while in the front, Vintage Wings pilot Don Buchan prepares to start up the engine. This particular aircraft is quite original as can be seen by the very yellowish flight instruments. 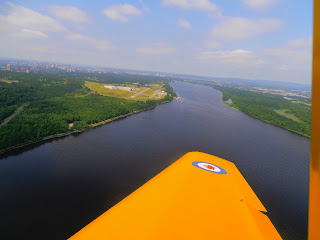 In flight view from the Chipmunk as we arrive at the Rockliffe Airport. The flaps are at the half position. Baggage carrying capability is tight on this aircraft as there is none at all, so travel light.
Posted by Unknown at 7:46 AM