The Vintage Wings of Canada biplanes have been travelling far and wide recently. In fact, eight provinces will be visited by our biplanes this summer to tell their unique stories to Canadians in order to educate, commemorate and inspire.

Vintage Wings has five biplanes in the fleet which are the Fairey Swordfish, de Havilland DH.82C Tiger Moth, de Havilland DH.83 Fox Moth, Fleet 16B Finch and the Boeing D75N1 Stearman(PT-27). Unfortunately, the Swordfish has done little flying this year due to delays in required engine parts, but the other four have been eagerly taking to the air and have visited quite a few of our capital cities this summer among other locations.

As people go about their daily lives in the heart of political landscapes where ideologies frequently clash, an unfamiliar sound has caused them to look up and wonder about the historic aircraft above. Hopefully, they have taken the time to further their knowledge about these timepieces of Canadian history and remembered what they already know. That they live in one of the greatest countries in the world with not only an incredible aviation history but that many years ago, people put their lives on the line, so that the the rest of us below could peacefully express their differences and then continue on with their normal daily lives. 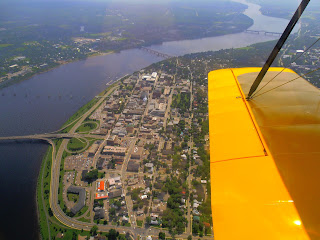 The three bridges that cross the Saint John River in Fredericton, New Brunswick can be seen from the Tiger Moth. Fredericton was settled by United Empire Loyalists in 1783 and has grown to a present day population of approximately 95,000. The lumber industry used to be the largest portion of the economy but in later years the main economic drivers have been the government and universities. The nearby CFB Gagetown army base is also a large employer. 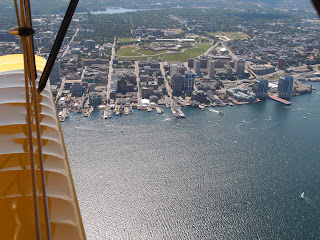 The Fleet Finch flies over Halifax Harbour and passes by the downtown waterfront area. Although difficult to see, several historic tall ships are berthed at the docks as seen from our historic aircraft. Halifax has been a Royal Navy/Royal Canadian Navy base since 1749. It was a major troop and naval convoy port in Second World War along with ship repair as it had been during the First World War. It was also the site of the world’s largest man-made explosion prior to Hiroshima, in 1917, which killed 1,900 people instantly after the collision of two ships one of which was full of munitions. The epicentre is approximately one kilometer ahead of the aircraft’s present position. 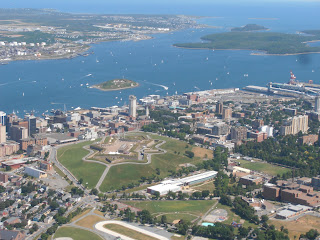 Fort George on Halifax's Citadel Hill lies within walking distance of downtown. Tourists will find a living history program to re-enact life as it was when the fort was in operation. There is also an army museum at the fort. At nearly 300,000 people, Halifax is the largest city in Nova Scotia. 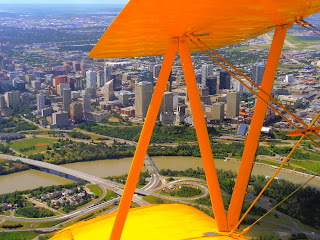 The North Saskatchewan River flows past downtown Edmonton, the capital of Alberta. While it is a government town, Edmonton is a staging point for the oil sands industry of Northern Alberta as well as the diamond industry of the Northwest Territories. The extremely convenient City Centre Airport can be seen in the upper right. Anyone who feels that it is a travesty that this airport is to be shut down should make their opinions known to the city council. 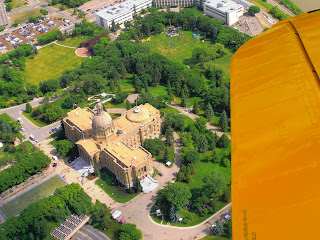 Crowds start to gather for the Canada Day celebration in Edmonton at the Legislative Assembly of Alberta as the Vintage Wings Stearman flies overhead. All Stearman EFTS flying during the BCATP was carried out at RAF-run BCATP bases in Alberta. 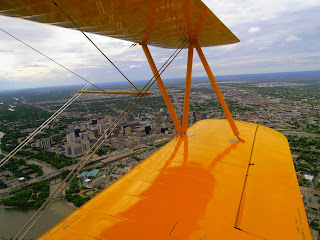 On the lower left, the flood-prone Red River winds its way through the heart of Winnipeg, Manitoba,  at almost 700,000 people, the largest city in Manitoba. The Vintage Wings Tiger Moth was based here in the Second World War but on this day, it is the Stearman reminding people of their training plan history. 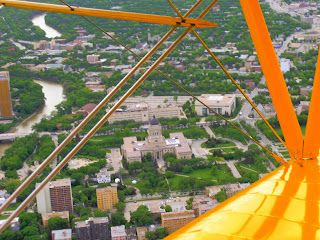 When flying an open cockpit aircraft, not every picture is crystal clear. The Manitoba Legislative Assembly building was finished in 1920, standing 253 feet tall. Barely visible at the very top is the famous Golden Boy statue. To the left is the Assinaboine River which flows into the Red River in downtown Winnipeg. 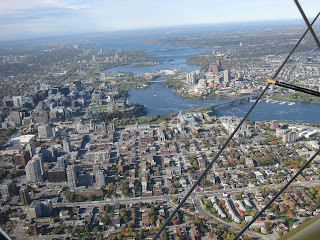 Viewed from the Tiger Moth, downtown Ottawa can be seen on the left including Parliament Hill. Across the Ottawa River is Quebec with the buildings of downtown Gatineau (formerly Hull) clearly in view. The National Capital Region has an overall population approaching one million people when all is included. 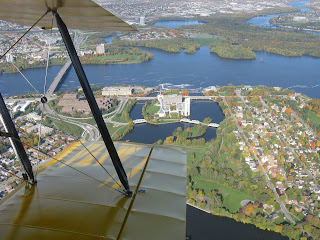 The former Ottawa city hall (now Department of Foreign Affairs) lies at the very end of the Rideau River where it flows into the Ottawa River. Nearby, the third major river in Ottawa is the Gatineau River. 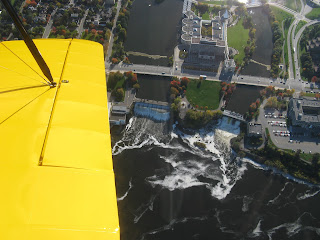 Looking down at the old City Hall in Ottawa from the other side, one can see Rideau Falls. Aside from government, there is a large high tech industry in Ottawa. 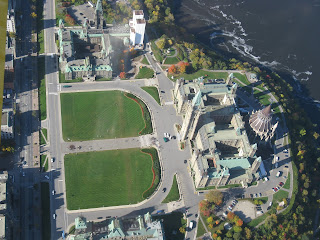 Looking straight down onto the Parliament Buildings from the Tiger Moth. At the back, adjacent to the river is the circular Parliamentary Library, the only portion of the original Parliament Buildings that did not burn down in the fire of 1916. The sharp readers of this blog have noticed that these Ottawa pictures are not from this year as the colourful foliage gives away that it is an autumn photo. 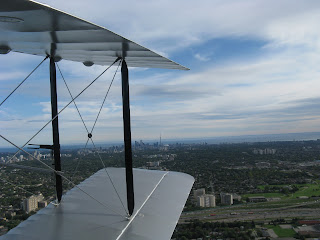 I have to admit that this picture was taken two years ago but I could not resist. The Fox Moth returns to Toronto skies where the Canadian versions were built just after the war. Of course you know that this is an English model as indicated by the slats. Toronto is Canada’s largest city and the capital of Ontario. In the distance is the CN Tower, which until recently,
was the tallest free standing building in the world. The Fox Moth is departing from Downsview Airport where they were built by de Havilland Canada.
Posted by Unknown at 11:30 PM