A visit to the Vintage Wings of Canada hangar is frequently rewarded with one or several of our aircraft standing proudly on the ramp. It is not unusual to show up on some random weekday and witness quite a bit of aviating activity with  the rumble of vintage engines and slipping of surly bonds being witnessed by pretty much just yourself.

However, there is occasional other airplane activity that presents itself and is most welcome. The interesting itinerant aircraft that visit. There has been a wide range of aircraft parked on the Vintage Wings ramp and a few of them have left their marks in the digital realm of my camera. Of course there have been many others that I have missed and you are almost always welcome to make an appearance, especially if your airplane is rare and was built long ago. 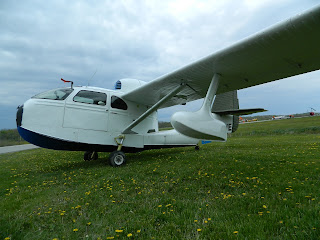 A locally based Republic SeeBee amphibian is a welcome visitor. The wings and empennage are heavily corrugated for extra strength. 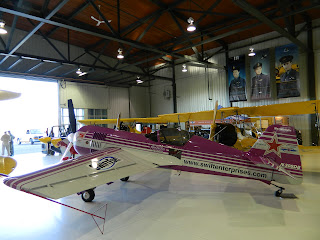 Airshow pilot Rick Volker brought his Russian-built Sukhoi SU-26 to Gatineau for the formation camp earlier this
summer. It is powered by a Vedneyev M14 nine cylinder piston radial engine. On the wingtip you can see the sight gauge to help the pilot perform precise 45-degree and vertical maneuvers. 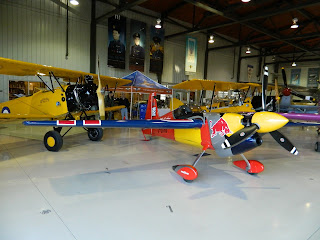 This is an Edge 540 aerobatic aircraft made by Zivko. It was flown by Pete McLeod in the Red Bull Air Races and the associated logo can be seen behind the engine. With a maximum g capability of at least plus and minus 10, it can handle the most extreme maouvers. 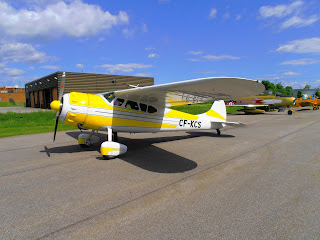 The classic curves of this Cessna 195 evoke memories of the golden age of aviation even if that era predates the manufacture of this beautiful machine. Based in southern Ontario, it made a brief appearance in Gatineau this summer. Its wide chord wing actually has extremely narrow chord split flaps that makes one wonder how much effect they actually have. This model does not have the crosswind landing gear but it does have a “Shaky Jake” for engine power. 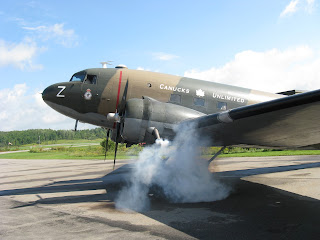 What more could one ask for but a DC-3 to fire up on your ramp belching smoke out with an occasional backfire after some heavy rain the previous day. Canadian Warplane Heritage brought this aircraft up for VJ Day celebrations in 2010 but it was cancelled due to heavy rain. Unlike most DC-3’s with their Pratt & Whitney radials, this one has a pair of Wright engines. 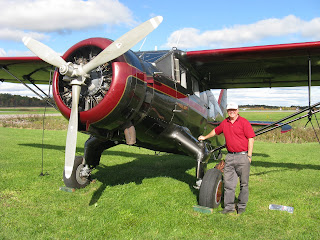 A proud owner stands with his Norseman which made the Vintage Wings ramp area home for several months in 2010. The author was lucky enough to get a checkout on this great Canadian icon and is forever grateful. In case you are wondering, it flies like a truck while consuming large amounts fuel and oil. 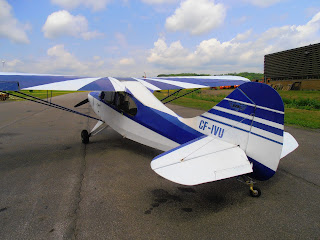 Memories returned of my first tail wheel aircraft checkout as this 1946 Aeronca 7CCM Champ showed up recently. It used to belong to the old Circle V Flying Club in Embrun but now makes its home in Arnprior. The 7CCM has a 90 hp engine and a wing tank in addition to the header tank as evidenced by the vent on the right wing. 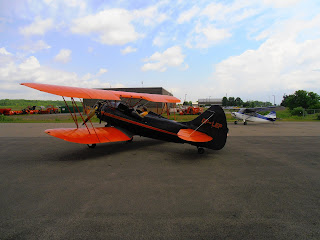 If I were to guess who might be Canada’s most experienced biplane pilot, I would have say Greg Reynolds. After giving rides in Stearman’s for many years at Rockliffe Airport, he now does it with a Waco(as do several other pilots) which can frequently be seen buzzing the skies of Ottawa. As well, you can be dropped off at Vintage Wings for a hangar tour.
Posted by Unknown at 12:03 AM