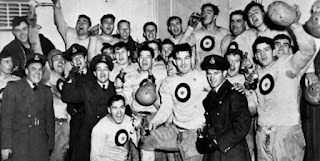 In 1942, a football team called the Toronto Hurricanes, made entirely of RCAF airmen beat another RCAF team from Winnipeg to win the Grey Cup. With the war in full swing, even the players vying for Canada's top football prize were serving with Canada's armed forces. Now, TSN, Canad'a premier sports network is working up a documentary on the 42 Grey Cup, the Toronto Hurricanes and in particular one player named Jake Gaudaur, a flying instructor from No.2 Service Flying Training School at Uplands, Ottawa. Jake Gaudaur would go on to become Commissioner of the Canadian Footbal League. TSN is soliciting your help in finding people and information that can shed light on this great story of the Second World War.

Here is there request:

Help TSN produce a landmark documentary series on the Grey Cup.
TSN, the official broadcaster of the CFL, is creating a series of original documentaries to celebrate the 100th Grey Cup. We need your help to find people, audio and visual recordings, and memorabilia. If you answer yes to any of the questions below please email us right away at CFLStories@gmail.com and play a part in the production of this landmark series.
The Photograph: The Story of Jake Gaudaur & the 1942 RCAF Hurricanes
1.     Were you, or anyone you know, at the 1942 Grey Cup game between the Toronto RCAF Hurricanes and the Winnipeg RCAF Bombers played at Varsity Stadium in Toronto?
2.     Were you, or anyone you know, a football fan living in Toronto during WWII? Did you, or anyone you know, go to a football game at Varsity Stadium in Toronto during WWII?
3.     Seven players from the 1942 Grey Cup winning Toronto RCAF Hurricanes lost their lives in WWII. Do you know one of the players below? Are you a relative or descendant of one of these players? Do any of your friends or acquaintances know any of these players?
THOMPSON, Eddie
LANGLEY, Lloyd
POSCAVAGE, Ed
BURTON, Eddie
BUCKMASTER, Jack
OLIPHANT, George
SARVIS, Bob

4. Did you, anyone in your family, or anyone you know train or fight in WWII alongside any of these players from the 1942 Toronto RCAF Hurricanes?
ALEXANDER, Jack
PARRY, Jack
STUKUS, Bill
GAUDAUR, Jake
MCGARRY, Paul
LANGLEY, Lloyd
EVANS, Art
DURNO, Don
POSCAVAGE, Ed
BURTON, Eddie
BUCKMASTER, Jack
CROWE, Don
FODERINGHAM, Cec
OLIPHANT, George
PARTRIDGE, Jimmy
POPLOWSKI, Johnny
PRINCE, Charley
REYNOLDS, Syd
RICHMAN, Joey
SARVIS, Bob
TAYLOR, Jack "Pooch"
WEST, Art
5. Jake Gaudaur played for the 1942 Toronto RCAF Hurricanes, and trained other young men to fly during WWII.  Did you work with Jake Gaudaur at RCAF Uplands Air Base in Ottawa? Are you the relative or descendant of anyone who did? Do you know of anyone who did?
6. Do you, or anyone you know, remember seeing Jake Gaudaur play in the 1940’s or the early 1950’s?
Contact:
Social Media Questions
TSN CFL Documentary Series
Infield Fly Productions
CFLStories@gmail.com
27 January 2012
Posted by Unknown at 9:03 AM