The Story Below High Flight

Adapted from “High Flight: The story of John Gillespie Magee” by Richard P. Bentham, from the Summer 1996 edition of the Journal of the Canadian Aviation Historical Society, Vol. 34 No. 2.

All photos from the public domain.

“Nothing that John Magee was involved in was ordinary,” wrote R.P. Bentham. 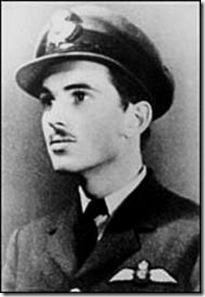 “John Magee had ties with the United States, England, and Canada. He was an American citizen by birth, but was British to all appearances and in his heart. He was not claimed as one of their own by the British because he was an American citizen, and he was not embraced by the Americans because his ties to that country were tenuous to say the least. How appropriate then that with one uneasy foot in the USA and the other in England it would be the last 15 months of his life as a pilot in the RCAF where he would find a sense of belonging, fulfilment, and purpose – and the inspiration to write High Flight.”

John Gillespie Magee was born in China to American missionary parents. He was a mischievous, high spirited child. He attended public (private) school in England, where his housemaster described him as, “intelligent, volatile, emotional, untidy, thoughtless and keen.” He was usually at the head of his class, and at age 16 won a poetry contest while attending the famous Rugby School.

In 1939, Magee was sent to school in the United States. Having attended a British school and having great knowledge of Plato, Aristotle, English literature and the ability to read Greek did nothing to help him fit in with his new American peers. But there was little love lost between them, as Magee described his fellow students as “excessively characterless and unintelligent.”

While he may not have fit in well with the American boys, the attractive young man fared much better with the girls and was a regular at parties, dances and social events.

In the summer of 1940, Magee won the top scholarship to Yale University – but his passion lay elsewhere and he soon joined the RCAF. He was selected for pilot training in Jan 1941 and was overjoyed. He had never wanted anything so much in his life.

Being in the RCAF gave him a goal and purpose in life - he matured from a lost adolescent, disillusioned with “modern” society, to a happy, mature, focused young man. While his parents were initially less than thrilled at his abandoning university, they embraced his decision when they saw the positive changes the RCAF brought about in him.

Magee began his flying career in St. Catharines, Ontario, at No. 9 EFTS, on the finicky (though the British may call it forgiving) Fleet Finch; he soloed after six hours (the average was nine). He may have been an above-average pilot, but his flying training also noted that he was “somewhat overconfident.”

From St. Catharines, Magee continued his training at No.2 SFTS Uplands, Ontario, on Harvards and Yales, which he loved. He got a dose of humble pie when he ground looped a Harvard on May 13.

June 16, 1941, was a proud day for Magee - that is the day he received his wings. Again, his flying report was excellent (“Almost exception in aerobatics.”). Magee was also a hit with the ladies in Ottawa; he “apparently managed to meet most of the girls in Ottawa while still doing well enough on the SFTS course.”

Just 11 days after his 19th birthday, Magee was commissioned as Pilot Officer John G. Magee, making him one of the youngest officers in the RCAF. Shortly thereafter, he travelled to the United Kingdom, spending a week hiking in Iceland along the way. During the last part of the trip to the Pilot Reception Centre at Bournemouth, the trains were so overcrowded that Magee and his friends slept in the overhead luggage racks.

Every pilot wants to fly Spitfires, and Magee was no exception. Imagine his thrill when he was selected for Spitfires, an aircraft at the absolute leading edge of technology in 1941.

His assessment at the OTU was as follows: “Very keen. Might make a very capable leader. Very calm in the air. Has shown patches of brilliance in his flying in contrast to moments of carelessness. An inclination to overconfidence which squadron experience should help eradicate. Will develop into a very capable pilot. Good average.”

From the OTU, Magee was posted to 412 Squadron on September 16, 1941. It was shortly after his first Spitfire flight that he penned High Flight. In a letter home he wrote, “I am enclosing a verse I wrote the other day. It started at 30,000 feet and was finished soon after I landed. I thought it might interest you.” On the bottom corner of the page is noted, “PTO for ditty.” 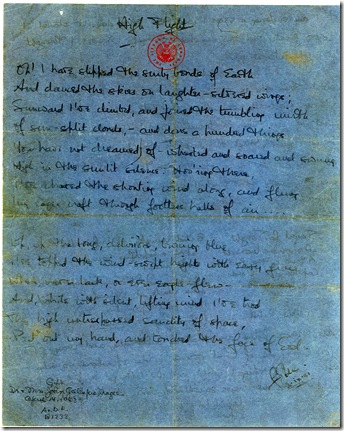 Copy of the original High Flight

This poem went on to become one of the most loved and well-known poems in aviation history. It has been recited at thousands of aviation events, been set to music, has shown up in Hollywood movies, and been quoted by Presidents and astronauts alike. It has captured the imagery and magic of flight felt by all aviators.

Magee’s letters home at the time also indicate that he was having the time of his life: “My squadron contains surely the grandest bunch of people that ever lived. I am sure I am going to be very happy here. It’s an all-Canadian squadron. The squadron leader is a peach, quiet but efficient and thoughtful.”

Magee’s first introduction to combat was a sobering one: six Spitfires took off and only three returned. Magee was the sole survivor of his section of four. He flew the mission in Spitfire AD291 – the same aircraft in which he would end his life on December 11.

He wrote to his parents: “I have at last been in action. I was flying in the leading section of 4 as the new CO’s wing man. I was the last man to see him alive, as just before we took off, he was giving me a little fatherly advice as it was my first action and I was a little uneasy!! We were jumped by 10’s coming in swarms out of the sun. We turned into them immediately but I turned so violently that I spun down a good many thousand feet and got away. I was the only one to avoid getting hit. The CO and two others (in my section) were all shot down. The CO Kitt Bushell was one of the grandest men I have ever known. The mess has an air of forced cheerfulness just now. Our losses (the first we have sustained) were pretty hard to take but we needed some waking up. Everyone is determined to get something next time.”

Towards the end of November 1941, Magee was flying twice a day, practicing gunnery, formation and night flying. In a letter to a friend he wrote, “Really you have no idea how terrifying – and yet how marvellous – it all is….I have never had such fun in my life.”

While Magee may have been having fun, he was not immune to the sobering reality of life as an operational fighter pilot. He wrote to a friend, “Frankly, however, I do not expect to last. It’s not a very sensible thing to talk about on the whole, but to be good you’ve got to take your chances and you can’t win all the time. I expect to end my days here in England…”

An hour later the section was returning to base, diving down through a hole in the clouds in a loose line-astern formation. Magee was third in the line and collided with an Airspeed Oxford trainer flying just under the cloud deck. He was seen struggling to get clear of his aircraft but both aircraft hit the ground near the village of Scopwick in Lincolnshire. Both pilots were killed.

R.P. Bentham wrote that, “A mid-air collision is one of the cruellest tricks that fate can play on a pilot.”

“Oh! I have slipped the surly bonds of earth

Put out my hand and touched the face of God.”