Greetings Vintage Wingers new and old! Today marks the beginning of something special. Myself, well I’m not that special (as much as I like to think so), but what Vintage Wings of Canada is doing IS special and it is my goal to show you.

With that said, every week starting today I, Chris Eaton, will be providing you with an in-depth look at the Vintage Wings restoration process. This is but one of the many, many, many facets that makes Vintage Wings such a wonderful organization.

There will hopefully be a little bit to satisfy everyone’s appétit, from the experienced AM-E to the aviation enthusiast wondering what makes an Aircraft tick…or fly…there will be technical details, status updates, mechanical details…and every other detail one might possibly wonder about in the realm of vintage aircraft restoration. Perhaps the watch metaphor was not necessary, I mean we’re talking about aircraft, they don’t tick at all, they fly, but I suppose the damage is done. But enough with the rambling, lets get down to business.

For those of you unacquainted with Vintage Wings of Canada I suggest, if you have an extra moment, you take a tour of our website. There you can find out all about the many things Vintage Wings does apart from what you’ll see in this blog. You will also be able to sign up for the most FANTASTIC newsletter you’ll have ever received. These newsletters cover all facets of the world of aviation and my God, they are good.
Here’s the link:
www.vintagewings.ca - you’ll just have to pick the language of your choice!

Now, I’m rather new to the restoration process. Well, actually, VERY new. I’ve been helping out for the past month and a bit, but if there’s one thing about restorations I’ve learned so far, they take two things: People and Time. However, with the right people and a dedicated team on a timeline, things will start to move along. The restoration, prior to my joining the team, has been going on and off for the past several years, but now, things are different. No, not because I joined the team (I like to think so, but thanks!) but because we have a dedicated group of volunteers and AM-E’s and a slot of time set aside for our project. The main project underway is the restoration of a Mk. XII Hawker Hurricane. For a bit more information on this plane, it’s available on our fantastic website.
Here’s the link:
http://www.vintagewings.ca/Aircraft/tabid/66/articleType/ArticleView/articleId/350/language/en-CA/Canadian-Car-and-Foundry-built-Hawker-Hurricane-XII.aspx

What a beautiful aircraft and one often over shadowed by the mighty Spitfire, I might add. For those of you who didn’t have time to check the link, the Hurricane accounted for more victories in the Battle of Britain than the Spitfire and actually outnumbered Spitfires. They made up the backbone of the fighting force during that hectic summer of 1940. However, it was together, only with their fearless pilots, that these mighty airplanes kept the Luftwaffe frustrated and triumphed in victory.

Each Saturday, it will be my pleasure to share with you a particular task that I’ve completed towards restoring the aircraft, an inside look at what the other team members tasks may include, and many, many pictures and descriptions of each (and every) step I witness that bring this wonderful aircraft closer to the skies once more.

So, without further a do, here’s where things stand: 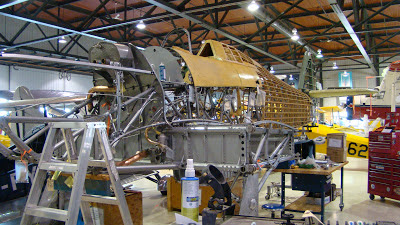 As can be seen, there is a lot of work still to be done! However, a lot has been done! The fuselage and its airframe are in good shape, the landing gear (you can’t quite see them) are attached, the coolant (the copper coloured ones) pipes have been “roughly” fit. That means that they were all installed to see if there weren’t any problems with the way things line up, and for the most part, they all fit quite well! A big slowdown is often hunting for missing parts and/or ordering them in. But as I mentioned earlier, the focus has been set and the restoration well underway. The Hurricane will be returning to the skies in no time! It’s the hopes, that through these weekly blogs, you will see how, not only how much work involved in a restoration, but also how quickly things come together.

This week, the task I completed along with another volunteer involved installing the Hurricane’s oil filter. 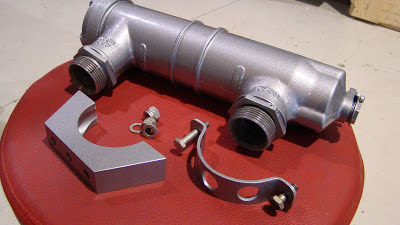 WARNING:  DO NOT remove the top of the oil filter!

Above is the oil filter. Inside the tube, is a filter encased in a spring. The top (which is the far left) screws off and out pops your filter. If there is any blockage or debris in it, it can easily be removed. Now, you wouldn’t want to just take off the top, oil would spurt everywhere! That’s why on the bottom there is a drain valve! The Oil Filter gets attached to the front of the aircraft. 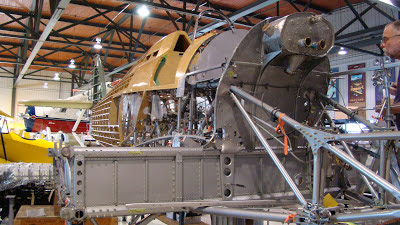 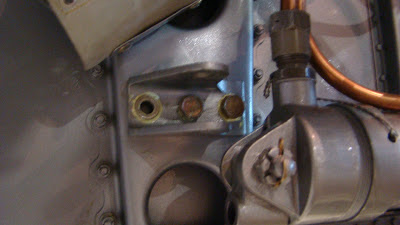 It is important to keep the bolthole well lubricated...

The first thing we had to do was remove the hydraulic support for the landing gear…well not entirely; we had to just move it to access the bolts that run through the wing root. Then we had to remove the bolts one at a time and replace them with longer ones so that the bracket assembly would fit (pictured below). You might wonder what that yellow substance is around the bolthole in the picture above. It is not corrosion or decay, but actually quite the converse. It’s (I forget the name, sorry!) an agent that slows down corrosion. Every bolt is “painted” before it is placed in its hole. This is very important because it prevents the bolts from corroding or rusting for something like 80 years! After the bolts were painted and replaced, we could attach the mounting bracket. 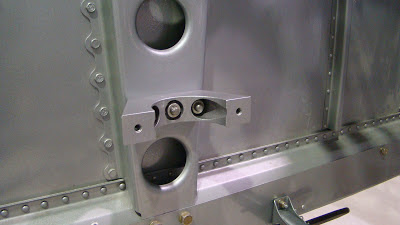 They were fresh out of mounting brackets for Mk XII Hurricanes at Canadian Tire, so we decided to make it ourselves

Pictured above, the mounting bracket. This bracket was actually entirely fabricated in the Vintage Wings hangar! The original, unfortunately, was in two pieces! This is an exact match to the original, and you’d be hard pressed to even tell it wasn’t the original! I couldn’t tell you how long it took to make that piece, but I imagine it was quite the intricate task! Pretty cool eh? 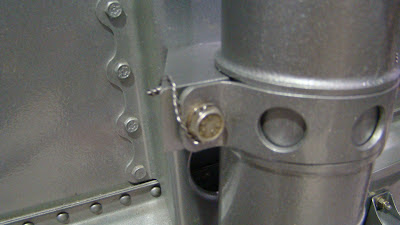 After that we had to attach the fuel filter and you might be wondering what that wire is around the bolt. That is a technique called lock wiring. In order to make sure the bolts do not loosen and fall out during the operation of the aircraft, they need to be secured. I think its vibration from the aircrafts operation that can cause the bolts to loosen, but I’ll have to double check for you!
To lock wire, in the fashion seen above, you have to drill a hole 1/16’’ through the head of the bolt. Then once the bolt is fastened, you feed the wire through, wrapping it around the bolt in the direction that the bolt is tightened in. Once you reach the hole on the bottom, you twist the two strands of wire around each other. Then you feed the wire through another hole on the bracket itself so that you can “lock” the bolt in place.
Now, there was a lot of excitement at the Hangar this Saturday and the excitement I didn’t snap a picture of the oil pump fully installed, so I’ll do that first thing next week! However, to finish of today’s entry, here’s what distracted me and had me walking around for an hour flabbergasted with my mouth agape. 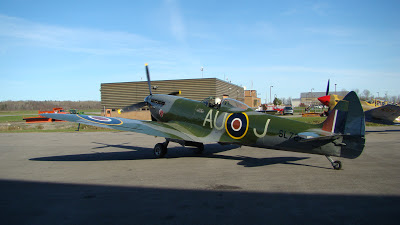 Getting ready for takeoff 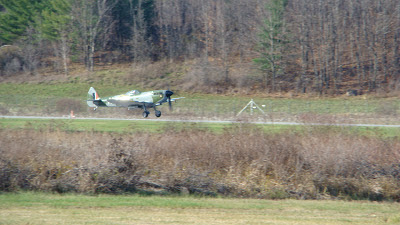 A welcome distraction for any AM-E is watching the planes they work so diligently upon take to their natural element in the skies!

The Spitfire and the P-40 starting up and going for a flight! I haven’t figured out shutter speed on my point and shoot but the props are spinning! There were many other tasks completed so I’m going to try and include a little more next time! See you next week!
Posted by Unknown at 4:41 PM