It’s funny…last week I mentioned that the Spitfire often overshadowed the Hurricane. Now I am not sure if you noticed or not (maybe you did, congratulations, you picked it up before I did!) but I ended that update having been distracted by the Spitfire…so much so that I forgot to take a picture of the installed oil filter and instead gave you two awesome pictures of the Spitfire. Oh the irony! So now, as promised, here is a picture of the installed oil filter! 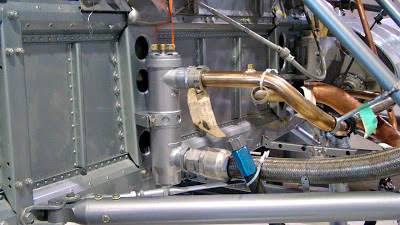 As you can see, the intake and outtake pipes have been fitted as well! Now just before we get underway with the various happenings of today, I would like to direct your attention to two things. First, after digging through the MASSIVE archive of the most excellent weekly newsletters (which you should sign up for if you haven’t – Vintage News - use the subject line 'Sign Me Up for Free Vintage News), I found one regarding the restorations at Vintage Wings of Canada. There are actually a few restoration projects underway so this article will provide you with a nice bit of info on the other projects! Now, I knew this I just didn’t mention it last week and I should have, so I’ll let this article do the talking.

^^Here^^ you’ll see the various projects underway, which include building a pair of Mk IX Spitfire Wings, the transport of the de Havilland Fox Moth from the Ottawa International Airport to the Hangar, some brake work that needs to be done on our Westland Lysander, and finally our XII Hurricane. There you will see the Hurry with her wings attached and get to meet some of the other members of the team! Be sure to check it out.

The second and last thing (I swear!) I wanted to draw your attention too is the dedication program at Vintage Wings of Canada. Every plane operated in our fleet is dedicated to a Canadian pilot who operated that aircraft...we do this to honour not only their service, but their courage, leadership, and sacrifice. We want to do more than just preserve these machines; we want to preserve the legacies of the men who flew them. The real stories lie not in the aircraft, but with the men who flew them. So in order to do that and honour such great Canadians, we dedicate each aircraft to a pilot. Our Mk. XII Hurricane will be dedicated to Flying Officer William Lidstone McKnight, DFC and Bar.  I have attached another newsletter (which I should have last week). This newsletter will tell you, in far greater and better detail than I’ve expressed above, all about our dedication program and every aircraft dedication in the Vintage Wings fleet. It is the stories like those of William McKnight that truly make the restoration worthwhile.

And now, the time has come! Let’s get down to business.

Today was a day where many things were attempted but then promptly left for later. The thing with aircraft restoration is that it’s like building a puzzle without the box. Not only do you often have little idea as to how things should be, most of the time (unless there was extensive documentation), you just don’t know how things once were (except from the guesses you have made from fitting pieces together, hence a puzzle). Now rather than run through everything that was done today, I will show you the two tasks that highlight this and that I took part in. The first involved making room for two. The second involved installing guides for the rudder and elevator cables.

That’s right, the first thing I did today along side Annie Carreau, was make room for a second seat in the Hurricane! Whaaa….TWO? Yes, two. We are exploring the possibility of the Mk.XII Hurricane to have two seats in her, for sponsored flights! There is still a lot to be done in order to make a space for a second seat, but today we had to remove some crosswire/bar supports under the ‘dog kennel.’ 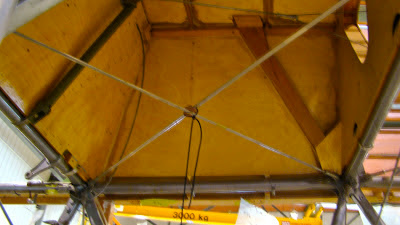 Surprisingly, none of the hangar dogs were hanging at the 'dog kennel'

Pictured above, you can see the crosswire/bar support underneath the kennel and the support running about a 45 degree angle towards the Pilot’s seat (pictured below) 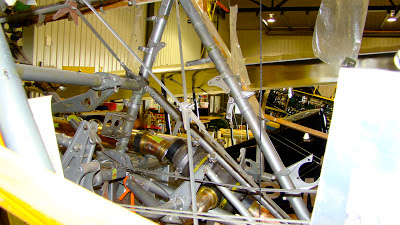 Best seat in the house

In the middle of each you can see a bracket/support (I really need to learn the names of these things) anchoring the two crossing bars together. The first thing we had to do was remove this piece. Then after we removed those, we could loosen up the bars and remove them. Now it was more trouble than you’d think to remove these bars because from the way it looked, those supports were put in place before the kennel (the big plywood structure on top). Anyways, after about an hour, all the supports were removed and the process of making space for two well underway! From the looks, it's certainly going to be cozy in there! 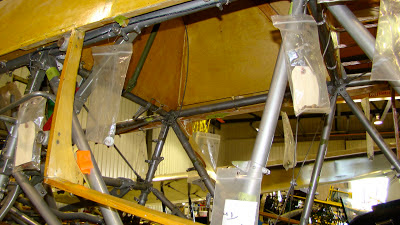 Moving along, the second task involved running some new rudder cables and attempting to install a track/guide for said cables. Now my camera (and photography skills) is not the best so you will have to suffice with the attempted assembly of the guides. I don’t know if it was the light or what, but the camera either focuses and the flash doesn’t work or it sets the flash off and all you're left with is a photo only suitable for a 60’s psychedelic rock album cover.

So that aside, here is what I could photograph! 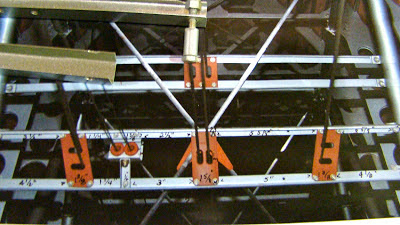 Wow! All the cables run, good job Chris! Well done! … oh that was but the dream, this is actually my guide picture from our Mk. IV Hurricane. I suppose the measurements gave it away (damn). Looks simple eh?...no. As you can see the cables running through the very left and very right guides (the red wooden shapes) house the rudder cables. The piece in the middle houses the elevator cables, the two circular shaped ones house a trim tab (I believe from the elevator). It’s actually called port and starboard, but for the purposes of this picture, left and right suffice. I also had to install that whole bracket assembly and that didn’t go as well as I had hoped. Anyway this is where I made it to! 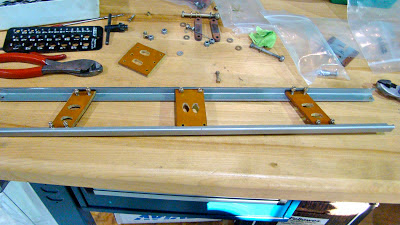 Not bad eh? Looks just like it! Then I realized that I needed some nuts and bolts to mount the bracket. After a quick lesson from Paul Tremblay, the man in charge, I was set on my way! 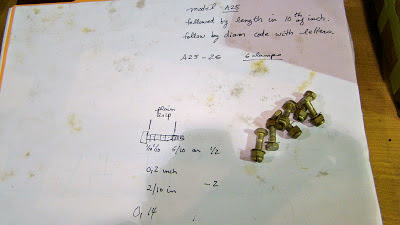 The 'plain grip' seems anything but


The British bolts we are using here are called “A25.” In order to figure out what size you need, you need to measure the distance of the material you are putting the bolt through. This determines your “plain grip” distance. The “plain grip” is the non-threaded portion of the bolt. Now British bolts are measured in 10ths of an inch (figure that one out!) and we determined I needed a bolt with 2/10’s of an inch “plain grip.” Then to figure out the size of bolt, there is a corresponding letter. I needed ¼ inch (if I remember correctly) and that ended up being a letter “C” (more like C for Chris…). So in the end I used A25-2C bolts. To add, we can only use “documented” hardware on the aircraft, so that means I had to sign these out of the inventory. Now, if anyone ever wondered where eight A25-2C bolts, washers, and nuts were on the Hurricane, they would be able to find out that they were holding the rear Rudder/Elevator guide assembly in place! All that for a couple nuts and bolts! Not quite as easy as going to Canadian Tire! 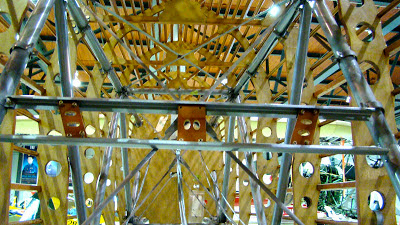 Things don't always line up the first time around, but with a little persistence and much determination they eventually will

Ta Da! Installed...well not really. Unfortunately, the center and far right (according to the picture) holes do not line up with their brackets. This will have to be revisited next week and a little TLC given to make it work and make it right. 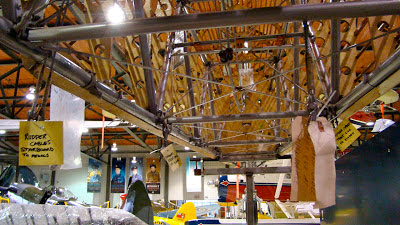 Each new cable gets its own label


So to finish off the day, I labeled off the cables that I had run. The rudder cables consist of 8 cables (4 per side) that connect just behind where the second seat is going. Rather than attach them together, I labeled them off because they will eventually have to be fed through the guide assembly once it is installed. Now if anyone else works on this they will hopefully understand my tags and know what to do!

Today was a busy day. It was immensely puzzling at times (but in a fun manner, working on a Hurricane is never not fun) but while it doesn’t seem like much was accomplished, a lot was. We figured out a number of things that need to be addressed, parts that have to be modified, and spaces that need to be engineered. Such is the process of warbird restoration; Fix one issue, find 10 others. But, if you recall the Tortoise and the Hare from your childhood, slow and steady truly gets it done. Well that’s all I’ve got for today, we’ll see you next week! Thanks!

Chris
Posted by Unknown at 1:20 PM