Yesterday, volunteers at Vintage Wings of Canada ascended the scaffolding around the tail section of the Hawk One Sabre to apply markings similar to those worn by Golden Hawk team Sabres during their last year of operations in 1963.  The tail section had just emerged from the paint shop where Vintage Wings master painter Korrey Foisey had stripped the “old” Centennial of Flight logo and applied a beautiful coat of Sheffield's Pale Gold - the original colour of the Golden Hawk's team

The “new” old markings were recreated by Jim Beliveau of the Royal Canadian Air Force and Dave O'Malley of Vintage Wings of Canada and cut from vinyl similar to that used for signage. Certain licenses had to be taken in order to fit the markings to a slightly different tail on the Hawk One Sabre. 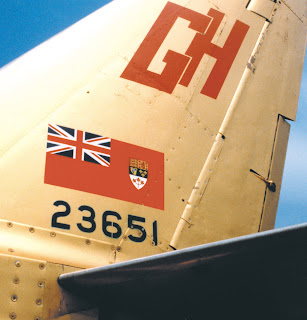 A photograph of a 1963 Golden Hawk Sabre tail (23651) showing serial stenciled over access panel at bottom of tail. Photo via Dan Dempsey

Halfway up the Hawk One tail there exists a large white blade antenna which would have sliced right through the GH markings if we had made them identical to the original ones. The GH was downsized to fit above the antenna comfortably. As well, we decided to lift the aircraft serial number two to three inches higher to take it off an access panel which 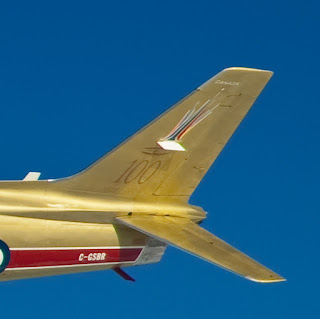 Photo showing the white blade antenna which would have sliced through the GH logo on the tail. The GH was reduced to avoid the visual intrusion. This blade exists on both side of the tail. Photo by Peter Handley

After conferring with Hawk One Lead and Historian Dan Dempsey, we had the go ahead to install the graphics with the adjustments required. The new markings were applied with the assistance of Vintage Wings pilot Blake Reid and volunteer Wayne Giles. 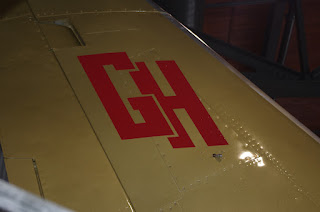 The famous GH logo is a applied to the tail. We can see the coaxial cable connector and bolt holes for the blade antenna. When the Golden Hawks were created, their tails did not sport this logo. Photo: Wayne Giles 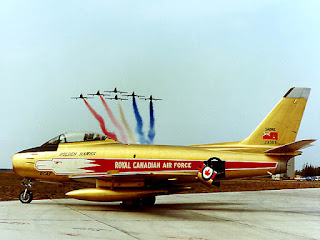 An early version of the Golden Hawks livery show that the the tail has only the serial, ensign and the word SABRE above the ensign. As well, the tail cap was bare aluminum. 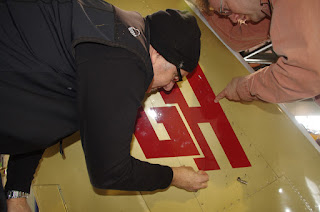 O'Malley and Reid work out the air bubbles on the vinyl appliqué. Photo: Wayne Giles 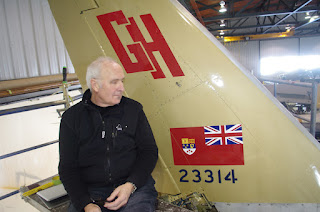 The starboard side is complete. As a young boy, I watched the Golden Hawks fly a number of times during Air Force Day at RCAF Station Rockcliffe. In those same crowds, was another boy of the same age. His name was Dan Dempsey. Dan is now the Hawk One Lead pilot and program director. Who would have thought that these two lad would some day work on a Golden Hawk Sabre? 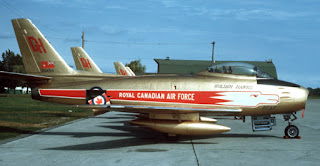 The Hawk One tail livery is based on the one employed in the 19623, final year of the team's existence.
Posted by Unknown at 9:29 PM