It's the Harvard's turn

As the winter progresses, the annual inspections at Vintage Wings of Canada progress. One by one, the aircraft are taken apart to a certain extent and looked over in accordance with manufacturers recommendations and government directives for any evidence of deterioration.

Overall, the aircraft, which flew extensively, last year across Canada on the Yellow Wings program, was in very good shape with one exception. One of the cylinders in the Pratt & Whitney R-1340 engine is in need of replacement.

Of the five Yellow training aircraft in the Vintage Wings collection, the Harvard is easily the most powerful. It was the aircraft that students went to for advanced training and on which they earned their coveted pilot’s wings. And advanced it is. With retractable gear, a constant speed prop and many other much more complicated systems, there is plenty to keep a pilot busy both on the ground and in flight.

The Harvard is not known for its docile handling characteristics. Stalls are abrupt, ground loops are not uncommon for the unwary and even taxiing can present challenges for the neophyte. All this and more created excellent training for students progressing to the even greater challenges of a high speed fighter aircraft. Harvard was definitely an appropriate name for this school of higher learning.

Actually, it all started back in the early 1930’s with North American Aviation. Originally a holding company for several well known airlines and aircraft manufacturers, the Airmail Act of 1934 broke up these holding companies. North American decided to become an aircraft manufacturer itself through its General Aviation manufacturing division in Maryland in the former Curtiss-Caproni facilities.

One of its biggest successes would be the trainer that eventually became the Harvard aircraft that we in many Commonwealth countries know. The original aircraft, known as the NA-16, was rolled out with an open cockpit and fixed gear. Various different models (with a canopy) were delivered to the Army Air Corps and the Navy. One might notice that the bolted-on wings to the centre section resemble the DC-3. This was no coincidence as Los Angeles based North American had recruited engineers from Douglas in nearby Long Beach.

As time progressed, so did the aircraft with retractable gear and more powerful engines. Difficult handling characteristics were tamed somewhat with redesigned wings and tail surfaces. In fact, some very early models even had slats on the wings.

Designations for the aircraft became quite complicated with various charge numbers from the manufacturer(such as NA-16 for the prototype) various air forces and navies around the world applied their own designations. To the United States Army Air Corps (USAAC) she was originally known as the ‘BC-1’ (Basic Combat - 1) and later as the ‘AT-6’ (Advance Trainer - 6). After the USAF became a separate service – this remarkable trainer was re-designated as the ‘T-6’. For the United States Navy (USN) – they were known as the ‘SNJ.’ In Canada and Commonwealth service, it was called the ‘Harvard.’ In Australia, a licence-built derivative was called the ‘Wirraway.’ The earlier fixed gear versions called the ‘Yale’ by Commonwealth air forces, were known as the ‘BT-9’ and ‘BT-14’ (Basic Trainer - 9/14) by the USAAC and called the ‘NJ’ by the USN. In all, over 18000 of these  aircraft were built.

Canada’s experience with Harvard’s started out in July 1939 with the Mk. I delivered from the expanded production facilities in Los Angeles. In fact, the RCAF had an office at the plant(North American later opened a second plant in Dallas). After Canada’s war declaration, many deliveries were flown to the border and towed across in order to comply with America’s Neutrality Act. The Mk. I was easily identified by its rounded rudder and its fabric fuselage. RAF ordered versions were NA-49's while RCAF ordered versions were NA-61's but they were virtually the same. The Mk I Harvards would last in flying service only until 1943. None exist today.

Mk. II versions for the RCAF were produced by North American as well as by Noorduyn with final assembly at the Cartierville facility in Montreal. These had metal skin, a stretched fuselage and the familiar triangular fin. Handling characteristics were improved with a redesigned wing and tail which included less sweepback and more of a tapered shape.

In 1940, the RCAF also received fixed gear models diverted from delivery to France after its downfall. They were designated as the Yale. Upgrades to Canadian standard included adapting metric instruments to imperial measurement and redesigning the reverse operation throttle installation.

The Harvard was such a success as a trainer during WWII that in 1952, Canadian Car & Foundry which had taken over the Noorduyn company was awarded a contract for 270 upgraded Mark 4 Harvards which were built in what is now Thunder Bay. Many of them were assembled from spare Mk. II components, however, in its final form the Mark 4 had a 24 volt electrical system and greater fuel capacity among other improvements. Its most visible difference is the redesigned canopy.

The Vintage Wings of Canada Harvard is a Mark 4 version painted in Mk. II colours in honour of John Gillespie Magee, and is known as the High Flight Harvard in honour of the man and his poem. 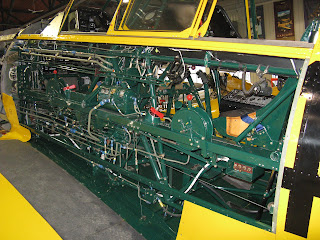 North American’s decision to no longer produce fabric covered Harvard's was of great convenience for maintenance personnel as the side panels can be quickly removed for interior inspection. They have been removed from both sides in this picture. This allows a great view of the inside. The circular pieces are the trim wheels for the rudder and elevator. The red topped handles in between the wheels are the wobble pump handles. Normally only used for start, they will be used continuously for the rest of the flight if you lose your engine driven fuel pump. The long red handles are the fuel selectors. If you look closely, you can see the rods from them angling down and meeting at the selector valve. 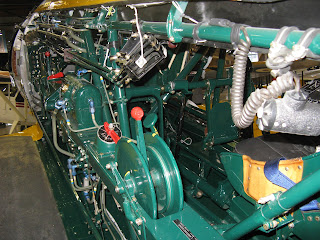 A closer view of the trim wheels with their yellow painted notches to be used as a reference for the takeoff setting. The trim wheels, wobble pump handles, fuel selectors throttle quadrant levers and gear handles are all interconnected between the two cockpits. 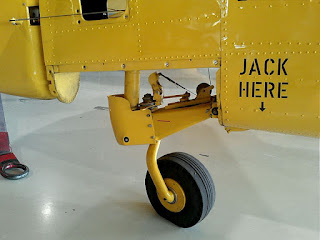 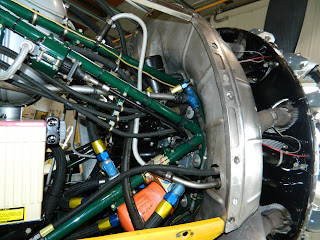 Looking at the back side of the engine mount you can see that the oil tank on the upper left is well separated from and aft of the Pratt & Whitney R-1340 Wasp engine. Three exhaust pipes can be seen entering a round circular unit which is a heater muff. Air in this muff is heated by the exhaust tube and is available as carb heat. 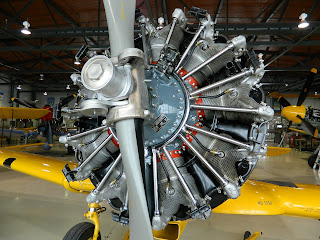 The non-geared version of the Pratt & Whitney R-1340 Wasp supercharged engine was used on the Harvard. The Yale uses a Wright Whirlwind engine. There are several intake pipes for ducting air around the engine. The two most noticeable ones at the 9 and 2 o’clock positions are to direct cooling air to the magnetos. At the top of each cylinder is a smaller hole directing air through a tube to its rear spark plug. 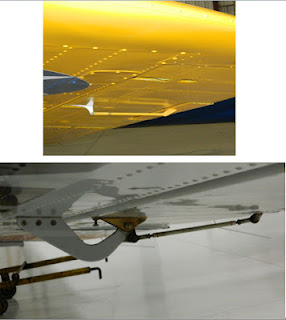 Forr those into finer details, here is a difference between the Harvard Mk.I/Yale wings(top picture) compared to Harvard Mk. II /4 wings(bottom picture). On the later aircraft, the sweepback was reduced on the wings and horizontal tail by about 2.5° for better stall characteristics. In order to maintain a similar wing area, the trailing edge was swept forward. The rod you see in each picture is for the aileron tab. It has to be attached to a non-moving portion of the wing in order for the tab to deflect with aileron movement. This silver piece in the top picture is actually fixed to the main portion of the wing, one of three aileron attachments The ailerons on the newer wings had a different style of wing attachment. In the lower picture, you can see that an arm was attached to the bottom of the wing to reach back and function as the fixed airframe part attached to the trim tab rod. 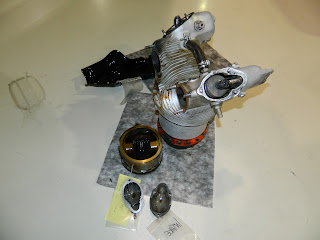 Out with the old cylinder, one of nine on the Harvard engine. The R-1340 Wasp was the first engine developed by Pratt & Whitney. It was classified as a top-secret design when it was developed in the 1920’s. It was the first American radial engine to use a forged crankcase resulting in a much stronger engine. Other P&W engines named after stinging insects were the Hornet and the Yellow Jacket. On this cylinder, the exhaust port on the far side of the cylinder is the one surrounded by more cooling fins. 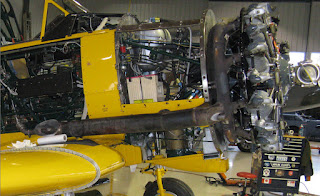 This picture really shows the exhaust routing clearly. From each cylinder into an exhaust ring and the into an extended tube. The extended tube is specifically for the heating pipe that you can see at the front of the exhaust pipe where fresh air enters and at the rear of the exhaust pipe where the now heated fresh air is directed into the cabin. This extended pipe was only installed on Mk. II and later Harvards. Early Harvards and all the other named types of this aircraft from North American and licenced producers had a short pipe with no heater. 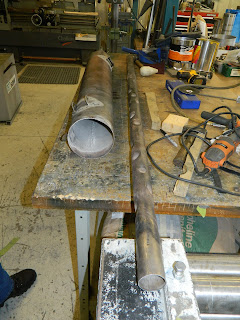 The heater system for the Harvard taken apart. Hot exhaust air flows through the large pipe. Fresh cold air flows through the dimpled small pipe which runs though the large pipe allowing the cold air to be heated prior to being routed into the cabin. Early Harvards did not have this heating system and instead had a short exhaust pipe which on occasion due to overpriming created a localized fire on fabric  covered aircraft. 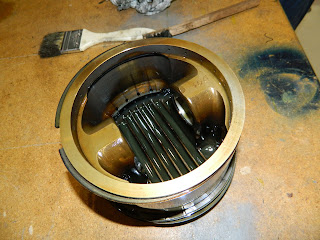 View of the back side of the piston which has 5 rings, consisting of two oil rings and 3 compression rings. The machined holes on the interior of the piston line up with the oil rings allowing oil to return from the cylinder back into the engine. The fins are for cooling and to provide lightweight strength. 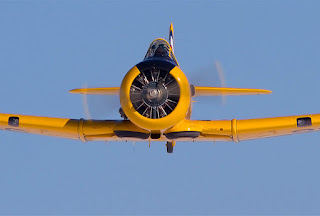 Soon, the Vintage Wings High Flight Harvard will dancing in the skies of eastern Canada with its fellow BCATP trainers on the Yellow Wings tour this summer. Once again, the howl of the Harvard will be heard as its propeller tips go supersonic.